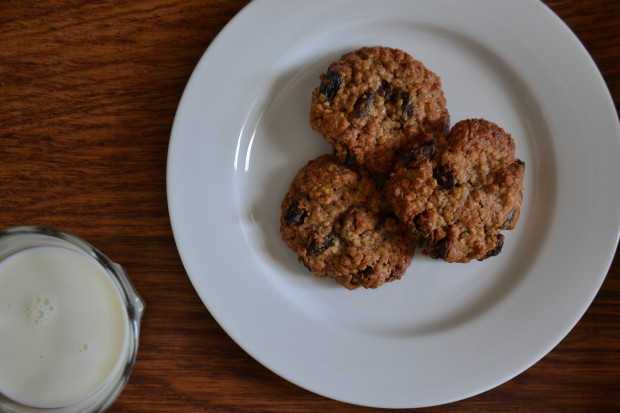 The classic combination is oat and raisin and this is something I’ve worked with. In fact, I have a recipe in my book for oat and sultana cookies.

Personally, I only cook with sultanas as I’m not keen on the flavour or texture of raisins. However, I’m absolutely not a fan of either when they are baked as they tend to go a bit crusty for my liking. I thought about how best to overcome this and went for soaking them in tea for half an hour before using them. This turned out to be a good call, as the flavour of the tea was subtle, enhancing the flavour of the sultanas, which stayed lovely and juicy.

The salt and two sugars give a lovely flapjack-like texture and depth of flavour and are a combination I shall certainly use again.

I’ll warn you – these are moreish – a cross between a cookie and a flapjack. Although they don’t look particularly spectacular, they really are delicious and I guarantee they won’t hang around for long. They are brilliant for picnics, packed lunches and for a mid-morning or afternoon nibble, and I’m sure children would adore them, too.

Put the sultanas and tea in a bowl for about 30 minutes to soften. Drain and set aside.

Cream the butter and sugars together in a large mixing bowl or stand mixer. Add the beaten egg, vanilla and beat again. Now add the flour, salt and cinnamon. Mix well and finally, add the sultanas and oats and stir in. Bring together into a ball, flatten and wrap in baking paper. Refrigerate until firm.

Pinch off evenly-sized pieces of dough and roll them into ball. Place well spread out in the prepared baking sheets and flatten slightly.

Bake for 15 minutes. They should be a medium brown colour around the edges and a little soft still in the centre. Remove from the oven. Cool on a tray for a few minutes then transfer to a wire rack to cool fully.