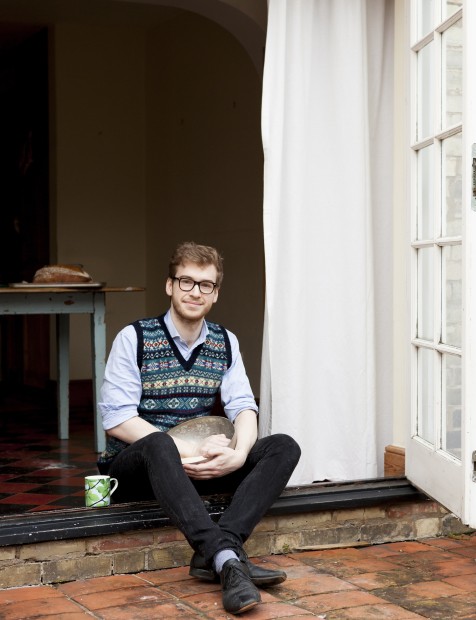 With Great British Bake Off fever gripping the land yet again this year, I recently caught up with James Morton, to see what he’s been up to, and to find out what he keeps in his fridge.

James was a finalist in the third series of GBBO, and published his first cookery book Brilliant Bread in 2013, which won the prestigious Guild of Food Writers Award earlier this year for Best Cookbook.

I started by asking James what it is that excites him so much about baking? “Baking does excite me. It’s a combination of the satisfaction, chemistry, biology of it – the way in which yeast can be manipulated and played with ties into medicine” which James studies at University.

Brilliant Bread is James’ first cookbook. A collection of creative bread recipes, published in August 2013, provided James a wonderful opportunity to explore his love for bread baking, particularly looking at what is going wrong when it comes to bread baking, and advising bakers at home on how to improve what they’re doing – something James finds endlessly exciting.

Life right now is good for James. The last couple of years have been a whirlwind experience, so I asked him what he has enjoyed the most about the whole experience. “It’s the people I’ve met” he says, whilst telling me about the team who have worked with him at Ebury, including his publisher Sarah, and Tim Hayward, who also worked with him on the book, not forgetting Will and Andy, the designer and photographer part of the project, too. It’s clear that they make a fantastic team, producing a great book, and all thoroughly enjoying the process along the way.

Surely having worked on so many recipes, James must have a couple of favourites amongst the collection? “Each recipe has a different purpose’ he says, revealing that the sourdough pain de campagne recipe and the bread made from leftover flour are the recipes which he particularly likes. The pannetone recipe is the one he is most proud of, as it took a really long time to get right. And when baking for people, it’s the brownie he likes to make the most.

In terms of every day baking, James reiterates that making bread on a day-to-day basis is simple, something which he urges readers to do using any ingredients they may have to hand. When it comes to giving out advice, James encourages readers to take a more relaxed approach, rather than worrying about following a recipe too closely, or worrying about doing things in a certain way.

Seeing his books on shelves up and down the country is something James tells is “nice” and brings a smile to his face. Winning the Guild of Food Writers Award earlier this year is James’ proudest achievement to date – seeing it as justification.

What’s next in store for this busy young man? A new baking book, which is due to hit the shop shelves in Spring 2015.

James has very kindly agreed to share his recipe for Gluten free brownies from his blog with you all. It is excellent.

And as for the fridge? Here are James’ top 5 things to have to hand in his fridge:

I’d like to extend my sincerest thanks to James for participating. Watch this space for the next instalment very soon!

Thank you to James’ team for kind permission to reproduce the photo taken by Andy Sewell.