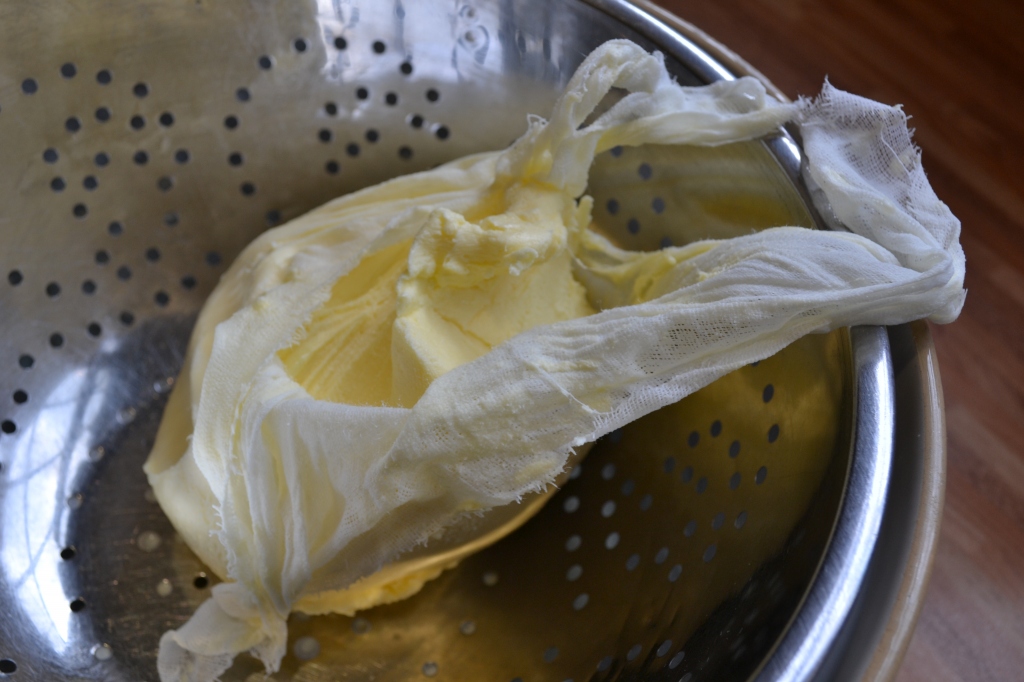 This post marks the start of a new cooking project I’ve embarked on.

As I have mentioned before, I am spending an awful lot of time in the kitchen at the moment, working on recipes I can’t share for some time. But I’ve also felt the need for some time now, to explore some of the fundamental elements of cooking.

I called this blog Charlotte’s Kitchen Diary, and this is exactly what I want to do here. I want to document what I’m cooking and what’s going on in my kitchen.  What I am doing is far from groundbreaking, but it is a process of learning for me, which I want to share with you.

There are two areas which really want to focus on, which may well change as the project progresses.

The first area is attempting to make ingredients which I’ve never made before. I really want to understand how they are made and experience the process for myself. I may never make them again, but I want to give it a go.

I know that my paternal grandmother made her own butter, and I would hazard a guess that she continued to do so until the 1970’s or 1980’s, whereby she then most likely started to buy it from Marks and Spencer’s Food Hall instead. I first mentioned I was going to have a go at making butter to my mother, whose first reaction was “why?!”. Well, that’s a good point. You can easily buy good farmhouse butter and you can definitely buy butter more cheaply than making it yourself.  But I am interested to learn more about how many foods we take for granted are made. I feel a deep sense of curiosity towards time-old ways in which food is produced. I want to decide for myself what is relevant nowadays and what isn’t. Despite my pretty crazy schedule, I feel a strong desire to eat more natural, wholesome and simple foods. If I feel as though something really is worth making yourself, then I will, despite my time constraints. I’ll make time.

The second area is focusing on using local seasonal produce – trying things I haven’t tried before. I’m now not living in London full-time, and I want to make the most of the countryside around me. Although I have lived much of my life in a more rural environment, I feel as though there is much to experience when it comes to sourcing food locally and seasonally.

This first post involves two recipes. These recipes belong together. So much so, because making one leads to the other: homemade butter and soda bread.  When making butter from cream, the byproduct of the butter making process is buttermilk, which is the perfect ingredient for making soda bread. Soda bread is a favourite of mine (and also very addictive, both to make and eat!) but I have never made it using fresh buttermilk, nor have I made my own butter before. Until now… 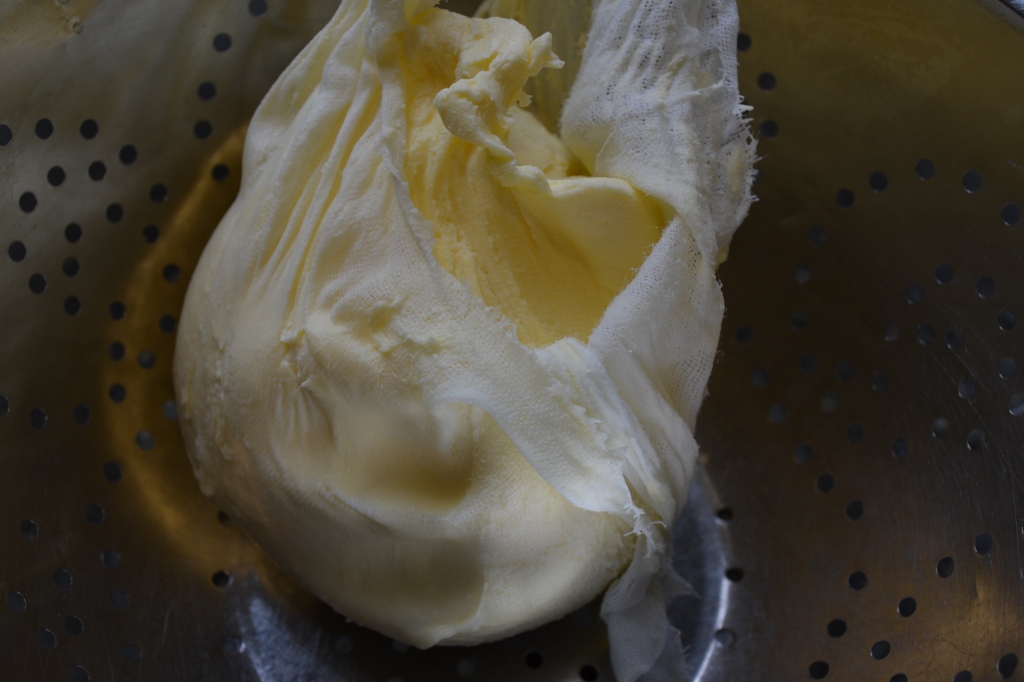 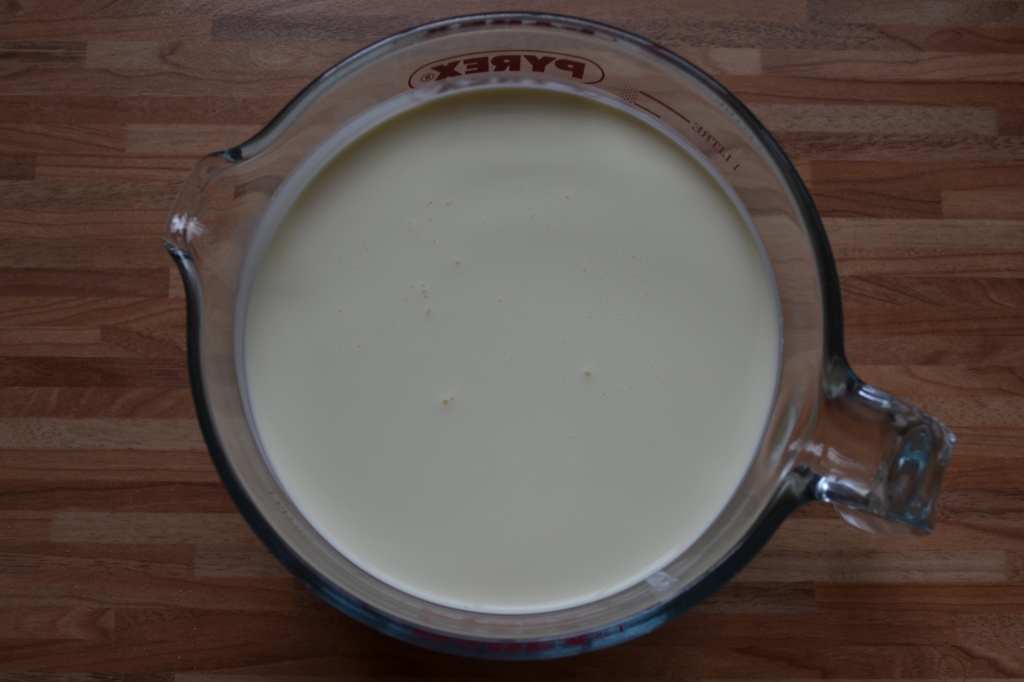 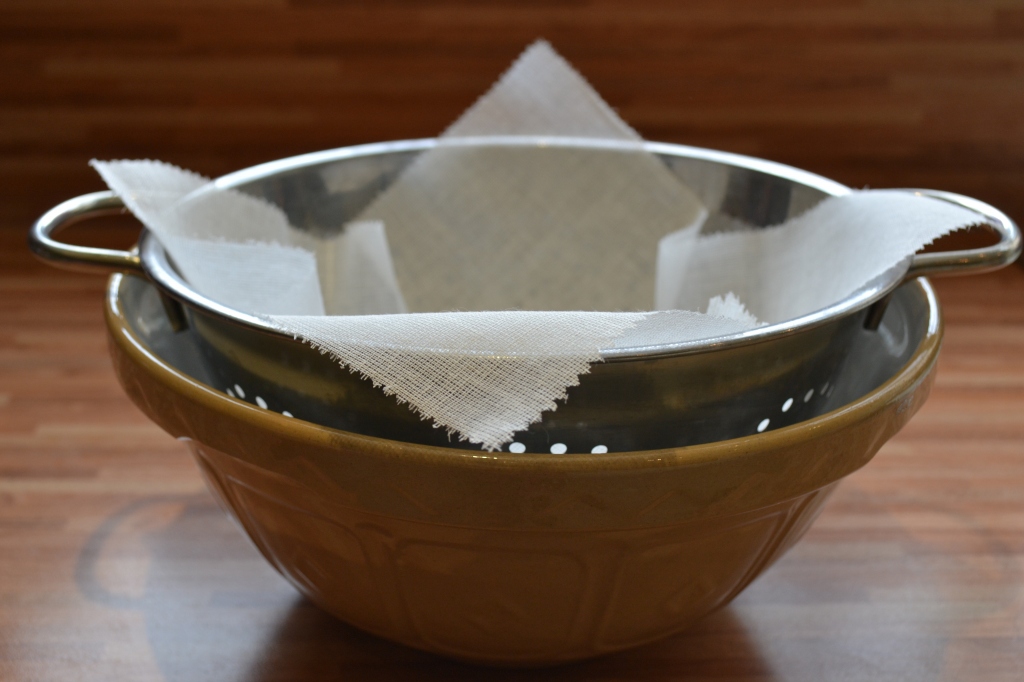 Setting up – a colander over a bowl lined with muslin 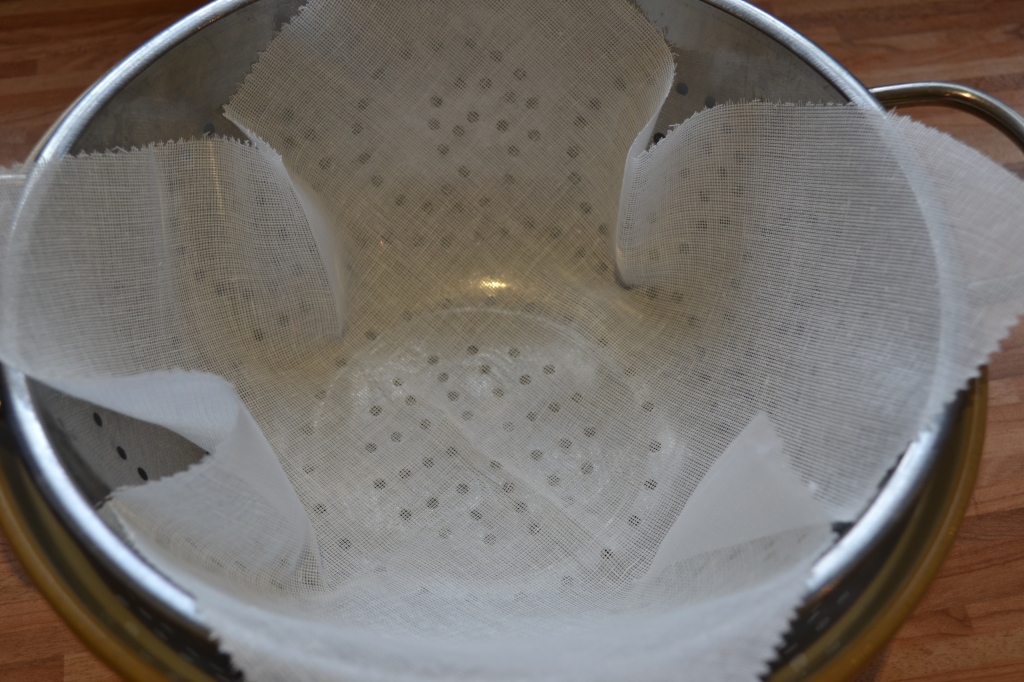 1)   Pour the cream into the Kitchen Aid or stand mixer with the whisk attached. Ensure the splashguard is on. 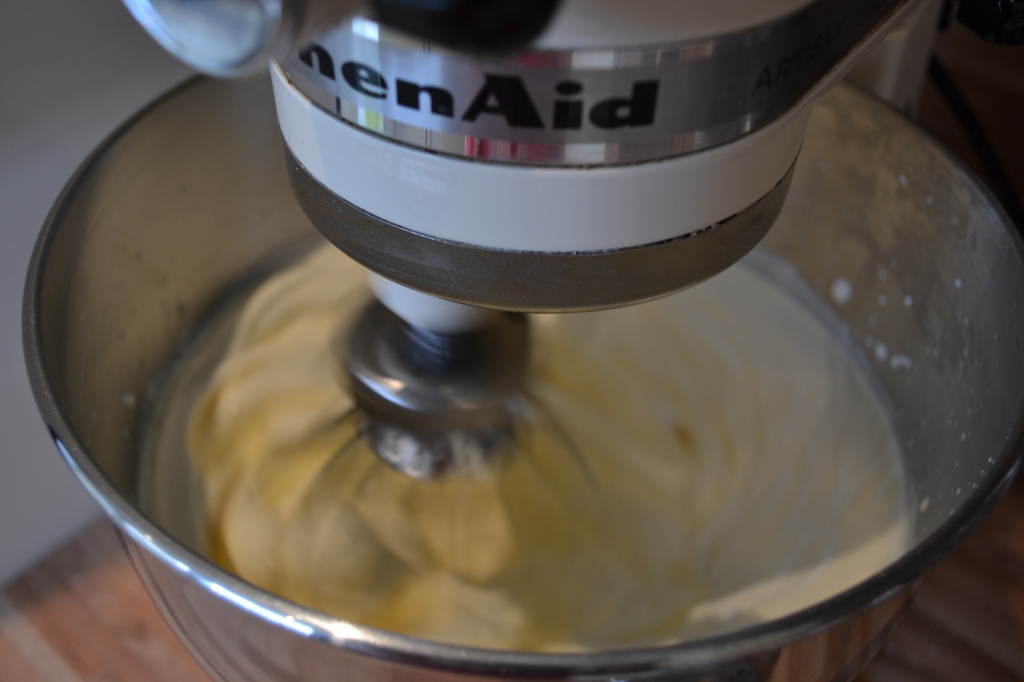 Starting to whip the cream

2)   Whisk for several minutes until the cream goes from lightly whisked, to heavily whisked, until it separates. 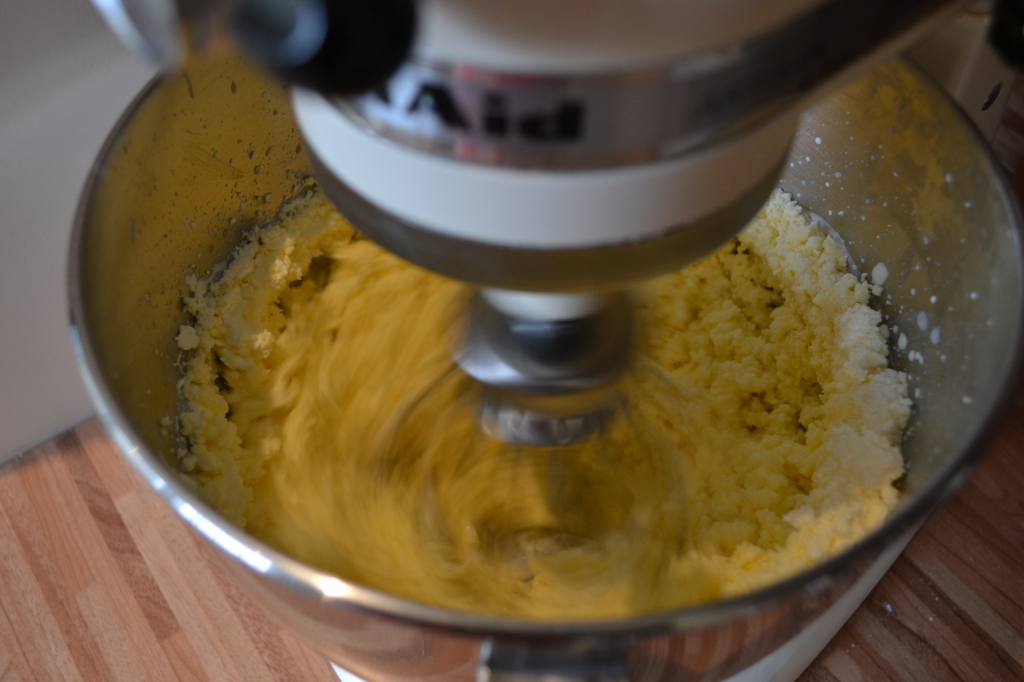 3)   Drain the butter in a colander lined with muslin 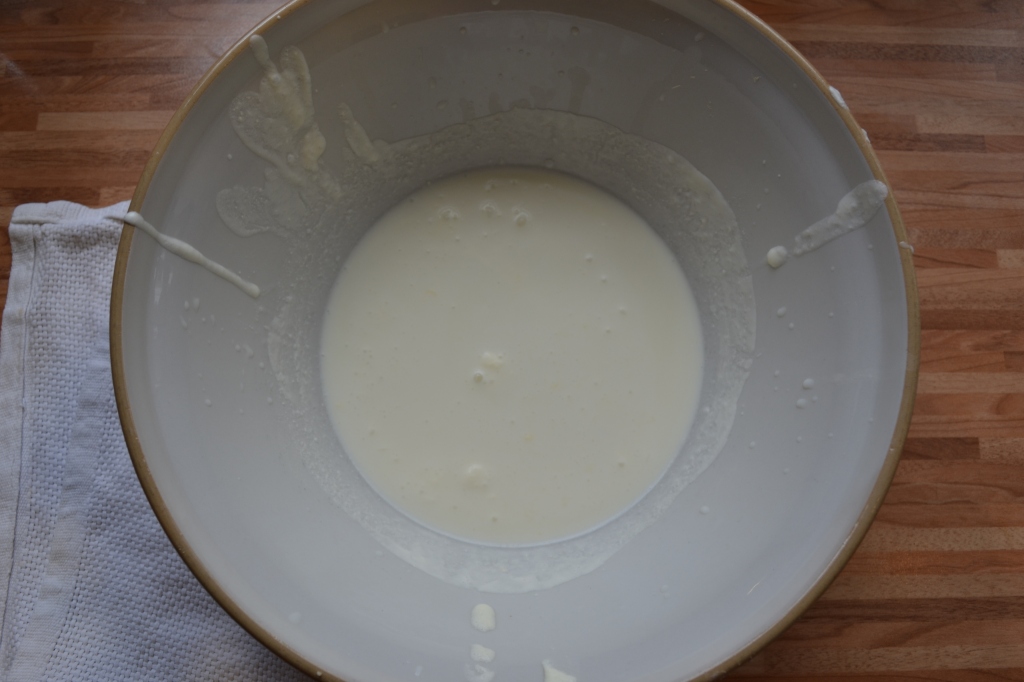 The buttermilk, strained through the muslin and colander

4)   Squeeze the excess liquid out of the butter

5)   If you would like to salt the butter, add a teaspoon of good sea salt to the kitchen aid and add the butter. Whisk again briefly until the salt is evenly distributed.

6)   Roll the butter out into two cylinder shapes. Wrap in greaseproof paper and chill or freeze. 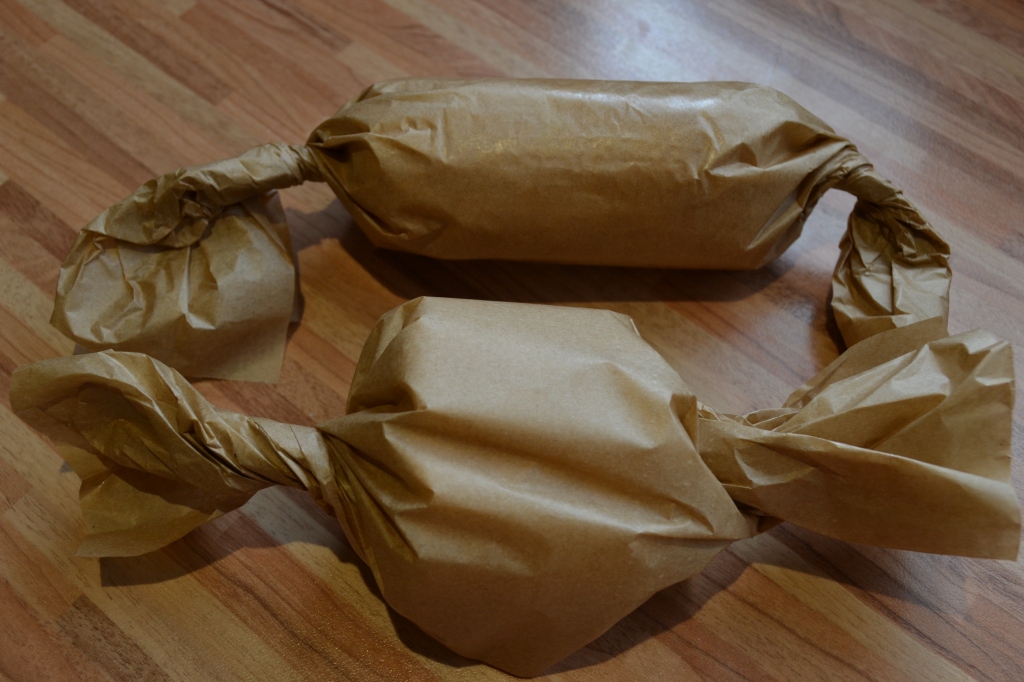 The butter. Rolled and wrapped, ready to freeze

I did not salt my butter, and froze it, as it has a short life when unsalted. 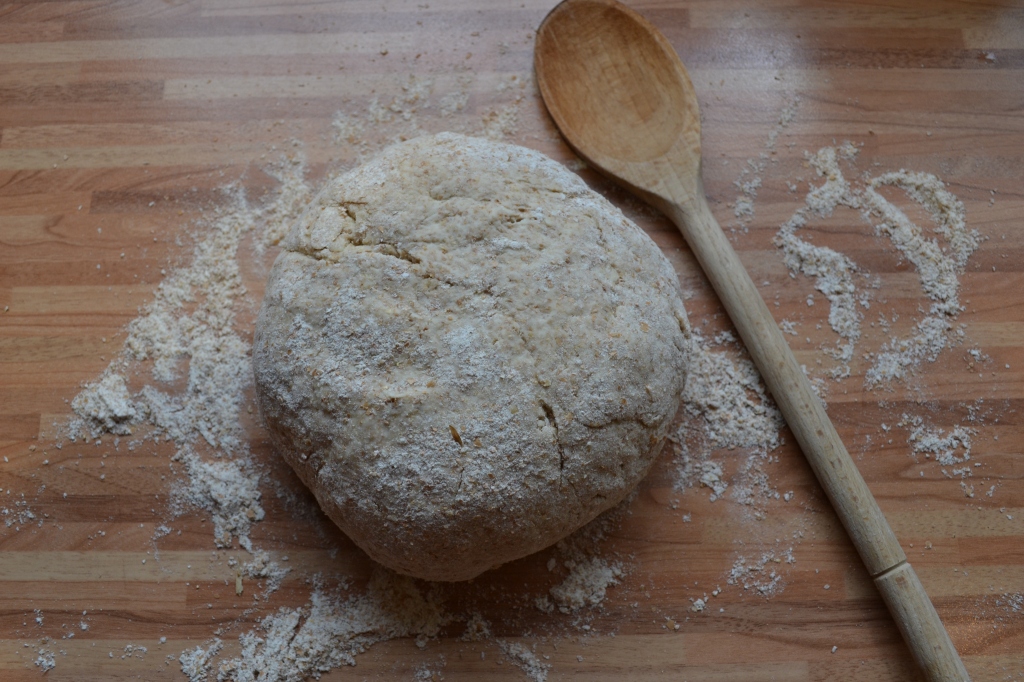 2)    Sift together the flours, salt and bicarbonate of soda in a large bowl and stir to combine. Add the melted butter and mix using a wooden spoon. The dough should be soft, but not too sticky.

3)    Tip the dough out onto a floured work surface, and gently bring bring it into a ball.

4)   Place on a greased baking tray. Using a wooden spoon handle, make a deep cross on the top of the loaf.

6)   When cooked, the loaf will sound slightly hollow when tapped on the base. Leave to cool on a wire rack.

I’d highly recommend making butter yourself. Admittedly, it is a complete cheat making it in the Kitchen Aid, but that doesn’t bother me. It’s simple and very quick to make. I costed up the process, and I reckon homemade butter is marginally cheaper than buying top quality farmhouse butter. But not by much. I’d be temped to make a batch using reduced (in price) double cream to freeze. I often see huge cartons of cream heavily reduced just after Christmas, for example, which we’d never get through fresh and I wouldn’t normally buy for that reason, but this would work very well. Homemade butter tastes very fresh and I love the idea that I know exactly what has gone in it (I always make sure to read the pack on butter, as I detest “spreadable”’ butter. I am always keen to ensure I buy the real deal.

On the soda bread, well, I am a convert. A soft dense crumb and a delicious crust, this bread is absolutely delicious and the easiest bread you’ll ever make. I like to use a British stoneground Organic 100% wholemeal flour. 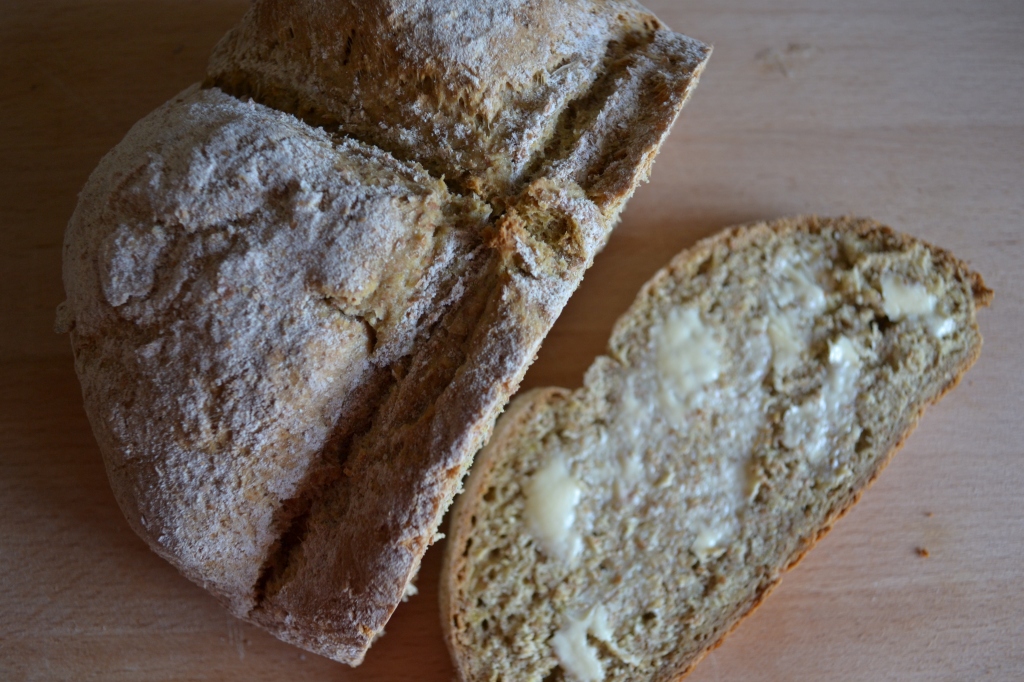