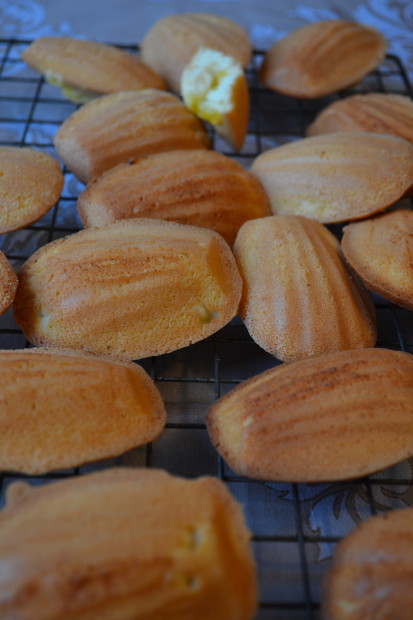 I recently attempted to make madeleines for the first time. I’d bought a pan, but just hadn’t managed to get around to giving them a go until recently.

When I started to look at recipes out there to follow, I was surprised by the way in which the batter is made, and particularly by the fact that it has to be chilled before baking. Expectations of being able to knock up a batch in 45 minutes flat were put to one side as with the recipe I used, the butter needs to be melted and cooled, the batter needs to be made, and then it all needs to chill for between an hour and overnight before baking.

Apparently cooling the batter in the fridge enables a nice crust to form on the madeleines, so it is vital that this stage of the recipe is followed. After some research, it was a toss up between a recipe in Scandilious baking and one by David Lebovitz, which can be found online. I went with David Lebovitz as it seemed less faff to put together.

On monday, I visited Vivien Lloyd’s home in Somerset to spend a day making how do i buy viagra online yahoo answers preserves with her (more to come on this soon). I came home feeling utterly inspired and made some homemade lemon curd, so I decided to adapt David’s recipe for lemon madeleines. In order not to breach any copyright, the recipe can be found here. I flavoured them using cardamom infused caster sugar instead of standard caster sugar (to avoid any black specks from using the spice) and filled them with half a teaspoon of lemon curd. I used self raising flour and omitted the baking powder, which worked perfectly.

They worked really well for a first attempt. I did overfill the indentations on the tray – I reckon 2/3 full is as much as you can get away with, but I misjudged this when I was spooning in the curd.

I didn’t bother with the glaze as I was very short of time, but I was really happy with them as they were – light and fluffy with the zesty, gooey curd hidden in the centre. The cardamom worked its magic, giving the flavour depth. I took them to a friend’s and we had them with tea.