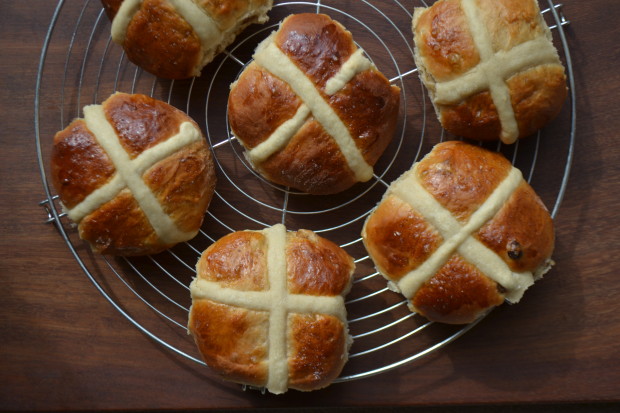 Well, I’m afraid this is later than I had planned. I made these buns several times after I returned from
Ballymaloe. I took a reasonable snap of them, and then had to go away for a fortnight with virtually no notice. So, the camera, photo and recipe stayed at home. C’est la vie.

Plus another egg, whisked well to form an egg wash

Put the flour into a bowl, rub in the butter, add the cinnamon, nutmeg, mixed spice, a pinch of salt, sugar and yeast. Mix well.

Whisk the eggs into the milk. Make a well in the centre of the flour, add the liquid and mix to a soft dough.

Cover and leave to rest for five minutes then knead (I use the Kitchen Aid) until smooth and elastic. Add the sultanas and mixed peel and continue to knead until the dough is shiny. Cover the bowl and let the dough rise in a warm place until it doubles in size.

Now knead the dough again for 3 or 4 minutes on a floured surface. Divide the mixture into 16 and shape into buns. Place on a lightly floured tray. Brush the buns with egg wash. It is important to egg wash the buns at this stage!

Cover the buns with cling film. Leave to rise until double in size.

Now make the liquid cross mixture. Stir the flour, melted butter and water together to form a thick liquid. Fill into a piping bag and pipe a liquid cross on top of each bun.

Before baking, egg wash the buns for a second time.

Bake in the preheated oven for 5 minutes then reduce the heat to 200C/400F/gas mark 5 for a further 10 minutes or until golden brown.

Leave to cool on a wire rack. Split in two and serve with butter.