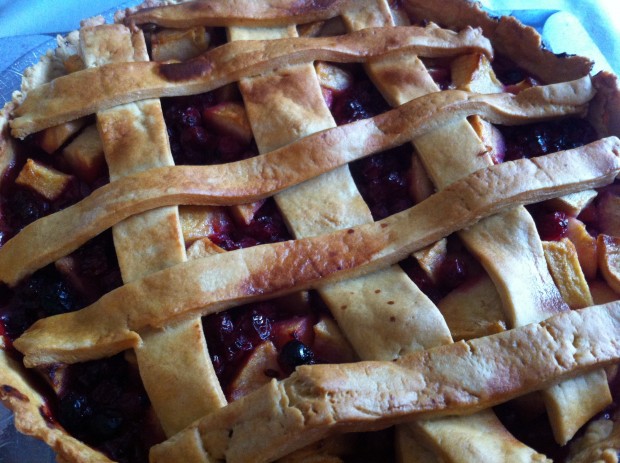 We fancied a quick and tasty pudding one evening this week. A fruit pie appealed. Looking around the kitchen, we had some nice eating apples to use up, and some of our redcurrants had started to go slightly soft.

I decided to follow Hugh Fearnley Whittingstall’s trusty recipe for apple pic, which can be found online. I added 150g of redcurrants to the apples, using eating apples rather than Bramley apples which I dislike. The redcurrants were surprisingly sharp in the pie, despite the sugar, but it was enjoyed nonetheless with lashings of organic cream.

I made this in an 9″ fluted flan dish as, having been recipe testing all day, it was the only suitable tin which was clean. It was a little large and I struggled rolling the pastry out to fit right up to the edges. Although for a family supper, the rustic look was perfectly fine for us! The pastry was very tasty although a little dry. You would not think I had glazed it with an egg wash from this photo. Next time, I will sprinkle some demerara sugar over the top before baking.

I’m entering this into this month’s River Cottage Rocks over at Jo’s Kitchen.